Whatever happened to Mad Mary and the Balloon Man?

Whatever happened to Mad Mary and the Balloon Man? 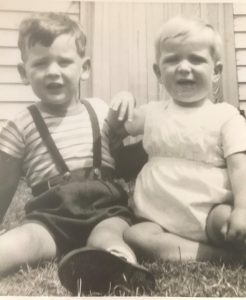 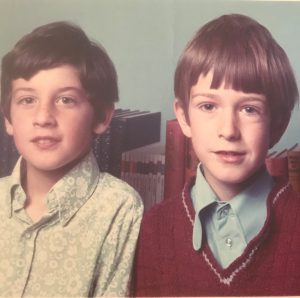 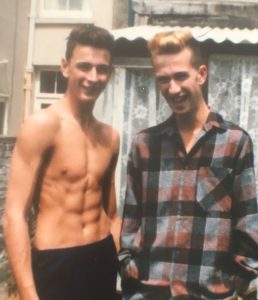 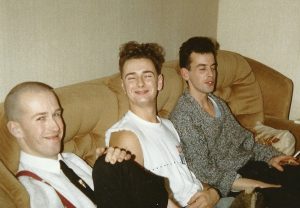 When I was a young man I was wild, eccentric and crazy. I was artistic and creative and had a fondness for hippie music and had a look that could only be described as ‘colourful’. Being young and gay I enjoyed going to clubs and parties (as most young people do) and I lapped up the club culture of the time: The New Romantics. I think as a consequence of a difficult childhood, I wanted to show the world I was somebody, I had great friends with shared interests and felt I could conquer the world. 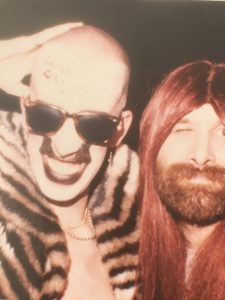 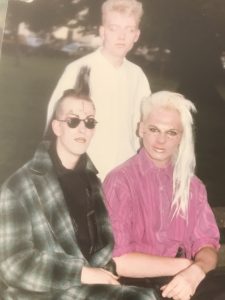 I travelled a lot too, especially to Amsterdam where I enjoyed the canals and the boats (a passion I still hold today). I also enjoyed the laid-back culture and if I’m honest smoking da weed. I had a lust for life and it was some of the happiest days I can remember. In those days a gay man was often called a Mary by his friends, it was a funny way of saying you were a typical gay stereotype. Because of my crazy antics on the club scene, I was gifted with the nick-name Mad Mary, which I wore with pride. I frequented clubs such as the infamous Heaven and G.a.y club.

The first big change was when I shared a flat in North London with my lifelong friend Nick, he had travelled up from Brighton (my hometown) with me. We discovered a club called Whirl-i-gig. It was a hippie New Age paradise full of ageing hippies, new age activists and long-haired hipsters. https://www.whirl-y-gig.org.uk

The club still exists to this day. I have always been fascinated by the 60’s hippie scene and my record collection included all the greats, such as Crosby Stills and Nash and Neil Young, the Doors, Nick Drake and many more. The club played all this music and was colourful and laid back. They had bongo drummers and at the end of the night a huge parachute would be pulled above the crowd and hundreds of balloons were floated on the top and it was lit with psychedelic lights; the effect was amazing. 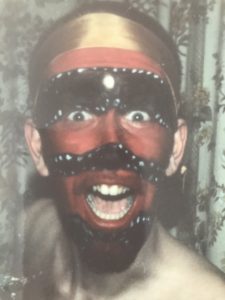 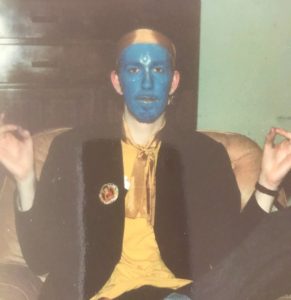 After being a regular for months I was offered the role of ‘Balloon Man’ and my job was to blow up the balloons and give them out to the crowd ready for the finale’. I earned about £10 a night for this but it wasn’t about the money. When you entered the club, a lady sat at the door and offered face painting, as I was the Balloon Man my face was painted each time, so I looked wild. The crowd would see me coming and shout, “Balloon Man” and they would cheer and greet me; it was great. I was sadly sacked from the role in the end because I gave too many balloons away to the spaced-out crowd early in the evening, leaving none for the parachute finale.

They held open-air events too and my fondest memory of this time was a live concert event on Hampstead Heath. The crowd was huge, and it was like a scene from the 60s, full of spaced-out hippies. Great music and lots of beer and weed.

After a while I moved on from this, I needed to work. I had left home young because of my violent father and had pretty much partied since I left Brighton for London. I grew up a lot after that and Nick, me and my boyfriend Trevor moved to a flat in Brixton. My image changed too, I tamed it down a lot. I was very into Tom Waits at the time and my image mirrored this. I wore a cloth cap and sported a goatee. This was the first time I grew a beard and I have had one ever since.

I found work at the BBC as a catering assistant for many years; it didn’t stop me going out though. The club scene was hotting up with the arrival of techno music. Later I got a bit hooked on the ecstasy scene that went with it and for about five years I clubbed every night. It became a problem in the end though and so just like that I stopped going to raves and never took E again.

My life began to change in stages, first I had a terrible break up with Trevor when we were on holiday in New York, he had grown very possessive and physically violent. In a moment of anger on the flight home I told him I never wanted to see him again, the strange thing was, I never did. He moved out and disappeared completely. Nick or I never saw him on the scene or anywhere else in London and to this day we do not know what happened to him. It was the time when AIDS was at its worst and Trevor was a very promiscuous young guy, many of my friends had died of this terrible disease and I wondered if he had too. I will probably never know. Somehow, during that terrible time in the late 80’s early 90’s I had not managed to catch that horrible virus, but it was a difficult time for everyone.

Trevor was the love of my life and I was heartbroken, I cried for weeks. As a result, I began looking for something new in my life, something to thrill me again. Strangely this came through my catering career, I had worked my way up to banqueting manager at a well know university and we used to arrange conferences for aid companies that provided schools and teachers to places like India and Africa. We provided the catering for these conferences and I used to stand and listen to their speeches on how they would build schools in poor countries and then send volunteers on TEFL courses in Oxford before sending them off to these countries to work as teachers. I quickly signed up, left my job and next thing I knew was on a flight to the Gambia in Africa for a year.

The school was in a remote jungle village called Kunkajang and there was no running water or electricity. The locals were so friendly and although poor, seemed to have all their needs met. They grew vegetables and kept livestock, so their food needs were taken care of. The locals were liberal Muslims (I say liberal because they drunk beer and smoked weed), and they worked very much as a community, helping each other out and supporting each other; from building houses to looking after the crops. I would have to travel to the community well for water and I used candles for light.

The kids were just wonderful, all ages from 6 to 16 and ready to learn; my year in Africa was wonderful and I didn’t want to come back but of course I had to.

Sadly, it was on my return to the UK that my life began to change to what it is today. Of course, there were no fridges in the village in Africa and my daily meals consisted of half a Bonga fish and rice. The rice would sit for days in the heat with flies swarming over it. When I got back to London my health was not good, my stomach was churning, and I felt unwell. As I had come back to the UK homeless I was put on the council house list and ended up in temporary accommodation in Deptford. The place was a small room on a gang-ridden estate; it was horrible. Because I needed to earn asap, I took a job at Waitrose supermarket as a wine expert (who figured) and got into a dull routine. One day at work I was keeled over in pain and ran to the toilet. I could not stop being sick from then on and was rushed to a hospital where I remained for three weeks. First of all, they thought I had malaria and kept me in isolation. I had test after test until after a couple of weeks a doctor came in and sat on my bed and I noticed she had a strained look on her face; she held my hand and said: “Stephen, you are HIV+!”

Of course, I was horrified, especially as she told me the lesions on my legs were a type of skin cancer; I was sure I was going to die. Funny thing is (every cloud) because of my condition I was gifted a council flat in Camberwell, so did not have to deal with this in that hell hole in Deptford. I then felt I had to tell my close friends such as Nick about my condition. Nick is always there for me and always will be, I love him, he is like family and he was great about it, in fact, all my friends were very understanding.

As I am writing this blog it is obvious I didn’t die. The medication these days is amazing, the cancer disappeared, and my status changed from AIDS to HIV+ and my CD4 (white blood cell count) shot up and my health went back to almost normal: almost: I did not realise it then, but my diagnosis would affect the rest of my life in different ways. The creation of new HIV medication has led to the wonder drug that is Truvada that almost eradicates HIV in the body (as long as you keep taking it), which means the possibility of me infecting somebody else now is extremely low.

I got proactive then, I signed up to university at the age of 45 and studied to be a counsellor. My experience at university was very positive and I have made good friends from those days. I also think it has helped me now in my new journey of exploration, but more about that later. I qualified from uni with a 2.1 in psychotherapeutic counselling in 2010 and worked for a short while in private practice. With the recession though it was hard to find paying clients and I found myself slowly moving over to admin work for the NHS which I do to this day.

Two years ago, I got a transfer out of the rough estate I lived in Lambeth and moved to lovely Hampton by the river and it’s canal boats that I so love. It all sounds pretty good now, doesn’t it? Well, I am sorry to say it isn’t; my life has come to a full stop. My life is lacking in worth and the stigma of being HIV+ has ruined my romantic prospects and my love of myself and my body. I am crippled by credit card debt and I’m desperate to get out of the rat race and rekindle that old me. The me that craved adventure and travel. 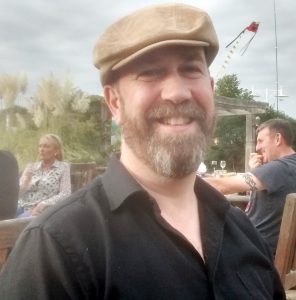 This blog is about who I am now and my search for Freedom, Peace and Hippie happiness: It’s about alternative lifestyles, living off the grid, escaping the rat race & vagabonding (long-term travel).

I find myself asking the same question quite a lot these days; whatever happened to Mad Mary and the Balloon Man?

One thought on “Whatever happened to Mad Mary and the Balloon Man?”

One Reply to “Whatever happened to Mad Mary and the Balloon Man?”